The inner critic is what we call that inner voice that judges, criticizes and shames us. The thoughts surrounding actions, interactions, reactions, our choices and our behaviors-  that is our inner critic. Yes, at times that inner critic can be harsh- which might seem like an understatement at times. We might hate on the inner critic for screwing with our self-esteem and our confidence. So, at some points in our self-awareness journey we might be convinced to get rid of the inner critic and those thoughts.

Is that ultimately helpful though?

Is it helpful to view that inner critic as an enemy?

In The Shek Check Episode 97- "Understanding the Inner Critic", we explore that.

Get notified when new episodes and blog posts drop. 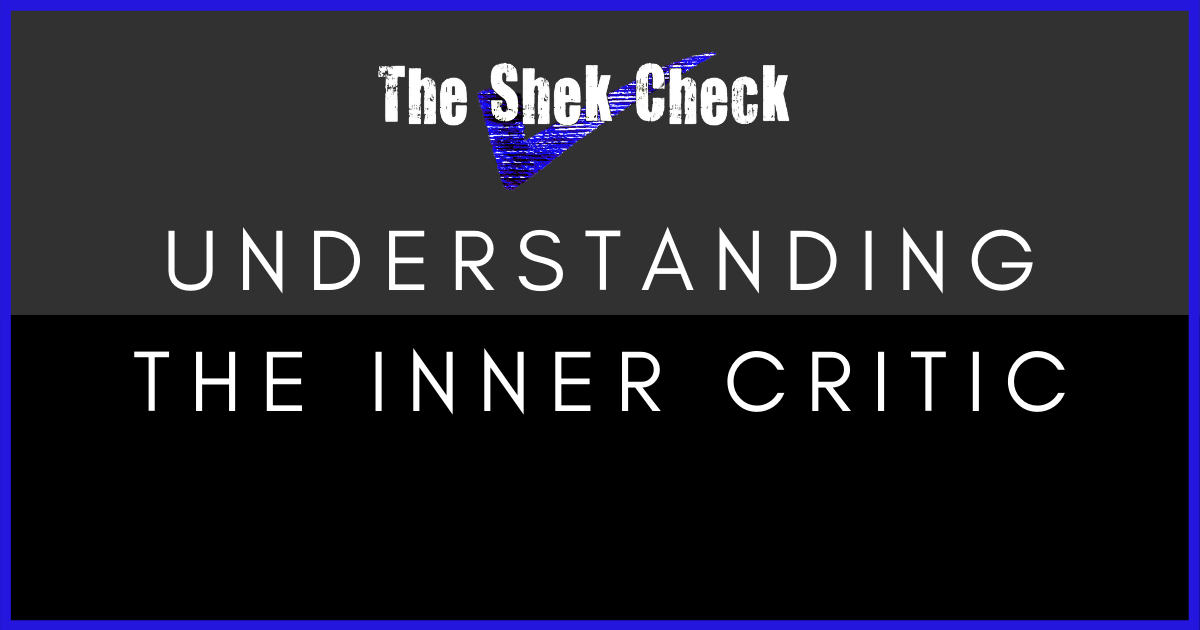 Hey there, thanks for joining me this week.

I am Erez Shek and you are checking in and checking out The Shek Check- where we drop some awareness so you can hopefully be inspired to take it inward to give your self-awareness muscle a good solid work out.

If you are new to The Shek Check- thanks for taking the time to check in with us, and if you are returning thank’s for your ears and your mind this week. If you haven’t already followed the Shek Check- wherever you are listening to us from- hit the follow button. I know I’m biased but I think its a solid life choice….in this moment.

Okay….so….. just for the record, I recorded that opening bit like….I think its 4 times...5 times now because it just wasn’t sounding good. The sound felt off, I didn’t think I was coming at it friendly enough...or it was boring. My inner critic was coming out hardcore--- and then I was like screw it. This is me. This is how it will be.

The inner critic is that voice inside of us… the thoughts... that basically revolve around ... criticizing ourselves right?

It's that voice that is energizing that self-doubt that is coming down on us maybe...the work that we're doing or that we’ve done or that we are about to do  or the choices that we make or maybe how we interacted with someone or how we are interacting with someone or a group of people….i mean come on, there's just so many things that that inner critic comes out and is playing around in the spotlight for.

I mean I honestly sometimes feel like all I am is inner critic - something ...you know that I'm continually observing. Identifying. Being aware of. Checking myself on. Challening.

The more I've kind of sat with this the more I think how some of those exercises are helpful- Yes. But it's also important for me to not view the inner critic as this like separate entity. Separate person. A malevolent force in my life because…. at the end of the day whatever the inner critic thoughts are and whatever the  beliefs of self that they stem from are-  they ultimately live in me. Those thoughts- they live in me.

You know as an actor you know - or atleast  coming from that performance space background- one of the things we learn kind of early on and hopefully we adhere to in some way is to not play a characterization of someone. Like not play a judgement of  a character that you're playing. Like I remember people saying things like…..oh it must be fun to play the evil character or the bad guy? Or like…how much fun is it to play the funny sidekick. Or….you get to play the hero...that is so cool.

However, as an actor it’s not always helpful to look at it with that judgment. In real life, bad guys rarely ever see themselves as being bad.They are making choices that align with their wants, their needs, their values.They are fighting for themselves, just like the hero is. They have something that is driving their decisions and they believe in those decisions. They have a backstory, a history, and things that bring them to this moment in the play and do the things they do….so it was better for me...the actor to look at the character from that perspective. If I wanted to give an honest performance I needed to understand the character, I need to connect with the character, empathize with the character. From a judgemental place- its harder to do that. If I call the character the bad guy- how am I connected with them? How am I understaiding and connecting with the things they do, the words they say and their life….that I am creating on that stage? I wouldn’t be...because a caricature is not something you connect with…..and so my performance ends up being kind of half assed. Which….doesn’t really do anything for me….or my fellow actors...or the show….really the story….which then affects the audience.

The so-called bad guy, is doing things according their wants, needs and values.

The so-called hero- is doing things according to their wants, needs and values.

The funny sidekick- is the lead in their own life.

In relation to themselves.

As an actor- thats what you look at. Not the title, judgements or characterizations, the label. You need to understand the character in order to connect genuinely.

So we call the inner critic the inner critic. We don’t exactly look at a critic in beautifully painted angelic light right? I mean in theatre- the critic is pretty much looked at in a love/hate relationship….or fear based maybe. So inner critic- we create this inner villain that we need to avoid, or silence, or fight with.

Is that helpful? Creating this inner villain?

Someone pretty awesome on social media said the inner critic is not your enemy and I felt that like I felt it really hard because I think there's so many instances when we are convinced that we have to be pitted against ourselves- in order to grow, heal or improve.

When we are creating those barriers within is, when we are pitting ourselves against ourselves-- even if we are not aware of it…..we're not helping ourselves. We are  harming ourselves and I think that's an important thing to look at.

So I guess the Shek check this week would be in identifying and understanding what that's inner critic sounds like for you. I think understand when the inner critic is loudest with you, maybe what those thoughts are, what they surround. Then ask yourself,  how can I meet it….meet myself  with a little more kindness and a little more compassion. Thoughts, feelings…..they are information. So how can you be more informed with those findings. How can you meet yourself and connect with yourself by choosing to understand what the inner critic is saying, maybe when they say those things the most, and maybe where you think they came from. Connect, understand, empathize.

Its all about self understanding and supporting yourself. It doesn’t have to be a war. Because the last thing we need when we're struggling is to create more of a struggle with ourselves from ourselves and isn't that why we're here in the first place.

Something for you to workout with yourself this week, should you choose to. Also don’t forgot to follow us wherever you are listening to us from, check in with us on social media. Facebook, Twitter, Instagram...all those handles can be found in the episode description today.

Until next time- Shek Check Out.

Subscribe to The Shek Check Podcast wherever you listen to your favorite podcasts. For Free.